The Playford Players gave us live music at many Friday dances since 2003 until retiring in December 2019.

Occasionally joining us at demonstration dances like thoes at Pinhey's Point here .... 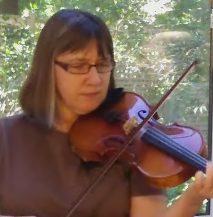 Elizabeth Scarlett played recorder and flute in primary school but switched to violin in grade 9.

She was a longtime member of the Ottawa Youth Orchestra under James Coles and studied with Flora Goulden, passing the Grade 8 Toronto Conservatory violin exam at age 18.

Elizabeth began playing Celtic fiddle in 1981 and was a regular attendee of the Rasputin's Monday night Celtic Session's from 1985 until it closed in 2008.

She taught fiddle at The Ottawa Folklore Centre for eight years, and subsequently was the Music Director of the Ottawa Fiddle Ensemble for several years. She also plays in the Ottawa Ceili Band. 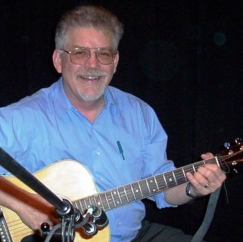 Jim Hunter began playing by ear when he was four years old and gave his first public performance at age six.

As a child he was exposed to classical and to folk music and passed his Grade 9 Toronto Conservatory piano exam at age 15. He performed regularly through his teen years, playing for dances and dance classes in his hometown Sarnia, and was a member of the American Federation of Musicians.

Now Jim is very well-known in the Ottawa area and a much sought-after pianist, playing for many local fiddlers and regularly at sessions, and at several ceili dances each month.

Jim's the pianist on local fiddler Sarah Burnell's award-winning CD's and has performed at the NAC's 4th Stage on several occasions. 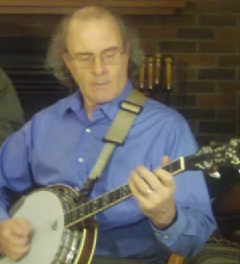 Alf Warnock was born in Glasgow, Scotland. He has been an enthusiastic musician all his life.

He began playing piano around the age of five and continued until age twelve when he took up the guitar. He played lead guitar in a skiffle band that became a popular teen rock and roll band in Glasgow, playing at weekly dances throughout the Glasgow area.

He later developed interests in Jazz and Celtic music. Playing banjo, mandolin, and fiddle, Alf hosted the Monday night Celtic session at Rasputin's for over ten years, and is the leader of the Ottawa Ceili Band.

Since his retirement a few years ago, Alf has focused on Jazz guitar, playing guitar and bass guitar in groups and at Jazz jams in Ottawa.